Is the United States pushing for war with Russia over a false narrative?
Are we being told the truth about what’s really happening with Syria and ISIS?
Is Russia behind the hacked email leaks?
Can we believe Obama and Hillary?
Has their foreign policy been successful?
What’s the deal with the ‘alt-Right’ movement?
Are they connected to Vladimir Putin?
Would Syria be better off without Assad?
Who presents the bigger danger? Hillary or the ‘alt-right?’ 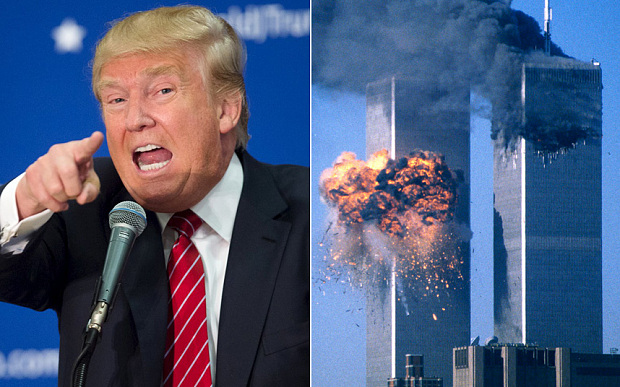 It’s been both disturbing and exhilarating to watch the neocons and the media freaking out about Donald Trump’s statements regarding 9/11 and the Iraq war. While some claimed he was acting like a “liberal democrat,” others accused him of being a “radical kook,” and close to being a (dreaded) “9/11 truther.” On the other hand, Trump claims that if the GOP can’t admit Iraq was a mistake, then they were going to lose (the election) again. And while it may have been unfair for Trump to put too much blame on George Bush; I think history has proven quite conclusively that the Iraq war was indeed a disaster. It was built on questionable evidence of WMD’s, and resulted in over a million deaths, millions of injuries, a decimated infrastructure, and a completely destabilized catastrophe that helped spawn ISIS all over the region. Was this the result of a mistake? Or was it deliberately built on lies? Either way, the consequences have been incalculable.

As for 9/11, 6 of the 10 commissioners of the ‘official’ investigation have since questioned the ‘official’ conclusions. And if you would like, we could examine some of the more serious holes in the ‘official’ story (like how the plane made a hole in the Pentagon, what happened with Building 7, etc), but we can save that discussion for another day. The greater point is this: whether you want to admit it or not, there are many aspects of the ‘official’ story that are highly questionable, and fair-game for a debate.

However, what’s not open for debate is that there are 28 pages of key information regarding 9/11 that were redacted from the ‘official’ report and have not been made public. The document has been circulated through congress, but is still marked classified. They aren’t a threat to national security, but they are a threat to the national narrative, and could be quite damaging to those who wish them to remain secret. Representative Thomas Massie described the information this way; “As I read it… we all had our own experience… I had to stop every couple pages and just sort of absorb and try to rearrange my understanding of history for the past 13 years and years leading up to that. It challenges you to rethink everything.” What is in the 28 pages? And why are they trying to keep it hidden from the American people?

But without an independent investigation, and without knowing what those 28 pages contain, we can’t really know for sure can we? So why are people attacking Trump, and protecting neocons like Jeb Bush and Marco Rubio? Why would anyone want to defend Dick Cheney? Or Donald Rumsfeld? Or an army of ancient, war-mongering monsters from the Bush administration? In light of all of the facts and contradictions, how does one continue to have unquestioning loyalty to the GOP and the ‘official’ 9/11 story? Or to defend a terrible mistake that ruined millions of lives?

The other question I want to ask the neocons is this: how are you supposed to reach out to the so-called ‘liberals,’ when you still blindly defend the Iraq war?

Obama’s foreign policy has more than its fair share of failures (Egypt, Libya, Syria, etc). But why should democrats listen to their failures, when you can’t take blame for yours? It was a horrible idea to put the Muslim Brotherhood in power in Egypt. It was a horrible idea to overthrow Gaddafi and destabilize Libya. And it was a devastating mistake to give weapons, training, and funding to so-called “Moderate Rebels” (that later became ISIS) to invade Syria. The liberals need to know these things. They need to stop being cult followers. They need to realize that the Obama administration has been just as bad as the Bush administration. But why should they listen to someone who stands alongside Dick Cheney? Why should they take you seriously when you defend unjustifiable wars, torture, and the Patriot Act?

At some point, we’re going to have to be intellectually honest with each other, find our common ground, and find our common sense. It’s the only way. Otherwise we’re dividing ourselves into two extremes trying to force partisan ideology on the other half. We can have different opinions, but we need to agree on the facts. We need to admit that Iraq was a mistake. And we need to release these 28 pages and have a national discussion about it. Then maybe we can come together to build a better future…